Backstage at Fashion Week 2012 in NYC – By Joy Duffany

Joy Duffany is a senior stylist and manager at Chameleon Haircolor Café & Spa’s.  She recently was selected to work as a backstage stylist for  Oribe Products  at  Fashion Week in NYC. The below is her story of this exciting international event.

I got to work on two shows with the talented Holli Smith.  The first show was menswear designer Loden Dager.  The looks were bright and shinny yet paired with muted tones and textures.  Holli’s inspiration for the hair was a look of opposing textures. It was a slightly pompadourian gritty, matte top yet shiny and tame on the sides yet kept current by it’s undone nature.

As one of her assistants we were to take the models and clean up their look with a quick trim that tightened up the edges of their cuts to create a tapering effect.  Then we used Oribe Maximista all over and blew dry the hair up and back to create the ultimate fullness.  Next we added more texture with a liberal amount of Oribes Dry Texture throughout. To finish Holli molded the hair into it’s final shape with Oribe Superfine Hairspray, making each model just a little unique.

The second show was designer Patrick Ervell.  They showcased two looks, one for his woman’s line and one for menswear.  The woman’s look was contrasting, soft and hard androgynous yet romantic.  The men’s look was youthful yet strong.  We prepped the girls by moistening the hair with Oribe Maximista and created a streamlined center part that was perfect from every angle.  We then kept the hair wet and tucked neatly behind the ears until the final moments when Holli sprayed them down with Oribe Superfine to smooth down and add shine.  The finished look was an almost drippy wet yet clean, simple and polished style. The men’s look was a frizzy top with sides that were brushed and shiny to create contrast.  We prepped the models with Oribe Maximista and Soft Laquer. We created curl with a tiny curling iron and haphazardly worked around the head purposefully missing sections, only to be blow out and frizzed up with the addition of Oribe Dry Texture.  The styles were finished with Oribe Superfine Strong to create a bowl cut effect in front of the face. 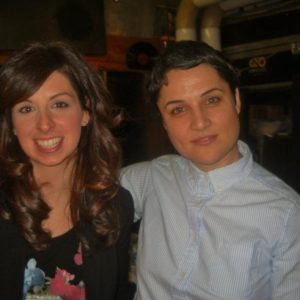 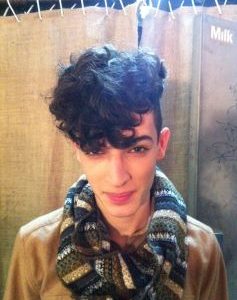 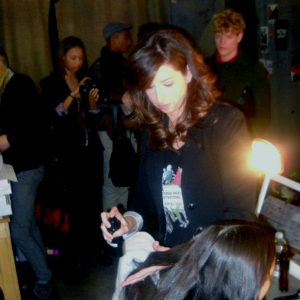 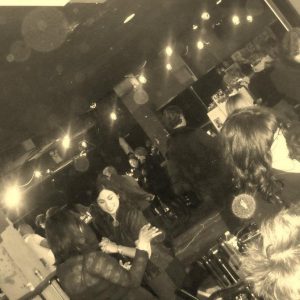 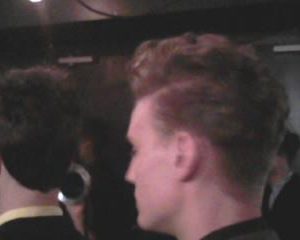 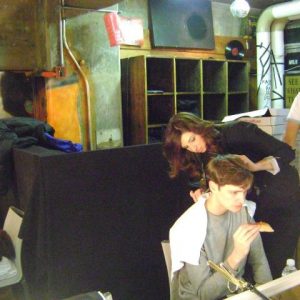 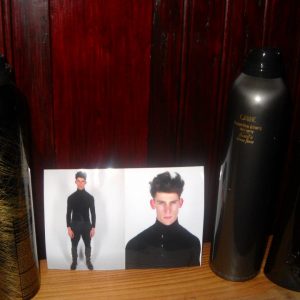 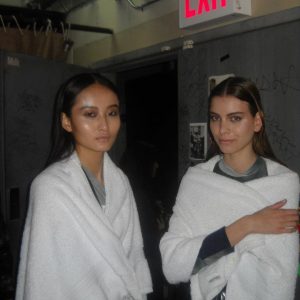