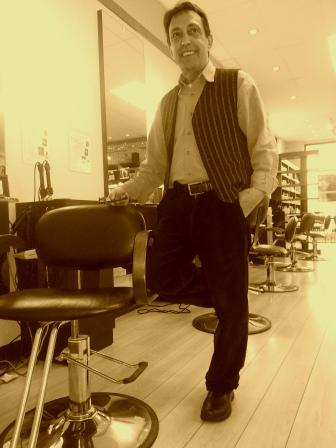 I can’t believe that I’ve been around long enough to see hair come full circle. It’s amazing that we are now seeing hair styles that were popular in the sixties. There are of course those famous styles from the forties, fifties, seventies, and even styles from the twenties were also making appearances at the Grammy’s and the Oscars.

I started my career 40 years ago in 1971. Forty-one years ago and boy did hair go full circle. I remember in my high school days, a classmate came to school with a Sassoon haircut that she had gotten in New York City. It was so amazing and different; I loved it! It was not very popular in my small town because it was different; it was asymmetric. I didn’t get to cut a style like it until a few years later. Maybe that’s why I still like asymmetric hair to this day.

In my senior year of high school, we saw long bangs and teased tops. Oh my gosh, we’ve been seeing this hairstyle a lot in the past few years. There is always a difference when old styles come back though; they have a different flair to them. A more modern flair if you will. Like clothing today has a similar feel of yesteryear, but with new material and a more modern cut to it.

In hairdressing school, someone came from Westport to demonstrate a shag haircut to us. That was another amazing haircut, albeit, similar to the Sassoon it didn’t go very far because the original shag was so extreme. It was gorgeous and it was also called the question mark cut. What did happen with the shag were variations on the original cut: long, short, medium, teased, not teased, curled, not curled. It was adapted to all different faces, body shapes, and textures. These became accepted and sought after hairstyles.

But there is nothing like the originals to me. Those haircuts were cutting edge, way ahead of everything that was out there.

We were still rolling hair and using hooded dryers on the majority of clients. It came slowly this process of blow drying. One by one, clients were coaxed into trying this new fad; they were getting away from hair sprayed to death, teased and lacquered hair.

For all of the young hair dressers today, I hope you can appreciate after hearing this, what an art hairdressing has become today. Don’t get me wrong, it has always been an art and will always be an art. Many a hairdresser has been influenced by stylists before them. In the middle seventies cutting and blow drying became more mainstream and hair really started to change its path, along with futuristic stylists that craved a change. I was one of them. Had hair not changed its course, I was going to change mine.

But hair became so exciting that you did not want to miss out on anything. Hairdressing shows and conventions were sought after by most hairdressers of that time. I was fortunate enough to be part of a hair cutting team in the seventies, so I got to cut hair at the New York show as well as the Chicago Midwest Beauty Show. I’ll bet that many of us left can still do a mean shag (the original of course!).

Hairdressing became more and more interesting and the artistic stylists that showed us what to do, like color, cut, and yes even perm, well you just cannot say enough about these people. They had this inspiration and artistic insight to continually bring us to new levels. They are the Sassoons, the Sebastians, the Rusks, the Doves, the Chadwicks, Paul Mitchell (whom I got to see in Hartfoed way back when), and the Toni and Guys. My God what incredible talent these people had and still have. I cannot even name all the hairdressers that I’ve seen through my career, but I would like to thank them all for changing this industry into the powerful and beautiful force that it is today.

And you know, the thing about it is that the young people going to hair academies now are being taught in a whole different way than forty years ago. They are so much a part of this ever changing industry. So I’ve seen hair from teased, lacquered, to Mohawks, to faux hawks, punk, afros, eighties perms with big teased bangs, and back again. Back again and admired, worn, copied, and even disliked. But that’s the fabulous part of hair today. You wear what you want and what you like. Back in the day I think there were two styles and you wore one or the other.

Today hair has no boundaries. As I look through our trade magazines today I get so excited. Hairdressers today are continuously pushing the limits and it’s incredible what they can create. Those styles are designed totally for their artistic value and are not built for street wear.

But who knows where hair is going; look at the progression that’s happened since the sixties. Hair is so beautiful today and the color that’s being done is fabulous; no longer a one color touch up, but more dimension with multiple colors.

To all those past hairdressers, to all of the future hairdressers, and to the faces new and old in our chairs, KEEP IT GOING! Keep it full circle.

You can request an appointment with Wayne by calling our North Haven Salon at 203-234-7900.